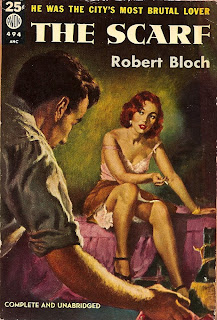 Most famous for writing the original novel of Psycho, which Alfred Hitchcock based his movie on, Robert Bloch had a writing career that spanned not only nearly his whole life, but also the 20th century. Born in 1917 in Chicago, IL, Bloch sold his first short story to Weird Tales in 1934 - when he was just seventeen years old! Before his death in 1994, Bloch published twenty-five novels and hundreds of short stories that ranged from horror to mystery to science-fiction, as well many other works for television, radio, movies.

His first novel, The Scarf (Avon #494) was published in 1947. It tells the story of a writer, Daniel Morley, who uses real women as models for his characters. But as soon as he is done writing the story, he is compelled to murder them, and always the same way: with the maroon scarf he has had since childhood. We start in Minneapolis and follow him and his trail of dead bodies to Chicago, New York, and finally Hollywood, where his hit novel is going to be turned into a movie, and where his self-control may have reached its limit.

Bloch uses a first-person narration that puts us not only in the mind of Daniel, but also in his hands as he crafts his stories and wraps the scarf around the necks of his victims. In many ways, it reminded me of Jim Thompson’s psychological noir thrillers such as The Killer Inside Me or Pop. 1280. A key difference is that Bloch is interested in finding the root of the character’s psychology, whereas Thompson doesn’t rationalize psychosis but instead confronts the reader face-to-face with it. Both writers each have their distinct approach, and each of them is disturbing in their own ways. Neither novelist will leave you feeling comfortable and secure – but instead touches something deep and dark within you, that little piece of security that makes you believe that the world will be all right tomorrow. In Bloch and Thompson’s world – nothing is all right tomorrow, and it never will be.

Bloch also seems to have channeled his own frustrations as a writer into The Scarf. Daniel Morley continually doubts his own creative talents, and is particularly pessimistic about the financial and commercial possibilities as a writer. Here is just one such passage, brimming with a young author’s anxieties:

“Did you ever stop to think about this angle? Thousands of guys are beating their brains out every year writing books. Every broken-down hack that ever had a job on a newspaper or in advertising sooner or later gets the idea that he’s going to write The Great American Novel. And hundreds of the damn fools actually do write their books and get them published, every year. How many of those hundreds of novels have you read this year? How many do you think anybody has read? […] You can starve to death in that racket, son. And here’s another encouraging thought: you’ve written one book, but how do you know you can write another? The woods are full of one-book authors…” 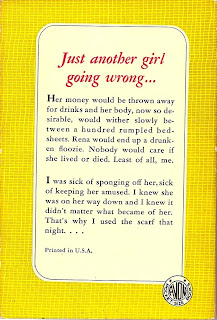 Below are a few more of my favorite quotes from the novel:

“Did you ever try to punch a raw oyster? That’s the way it was, fighting with Hazel Hurley.”

“As I turned and ran down the steps, I thought I could hear her scream. But it was only the grinding halt of the train.”

“Her voice gurgled like water in a faucet. I turned it off.”

“I open the notebook and take up the pen, and here I am, playing with words again. Even in crisis and despair, I play with words. Crisis…despair – they’re words, too.”

If you’d like to read more Robert Bloch, head over to Hard Case Crime and sample chapters from Shooting Star and Spiderweb – two other excellent novels worth picking up, and published together in a cool, vintage “back to back” format!

You can also find several interviews with Bloch online, essays about him, and links to his stories, at The Unofficial Robert Bloch Homepage. Petri Liukkonen and Ari Pesonen have also written an informative essay and bibliography.
at March 06, 2009