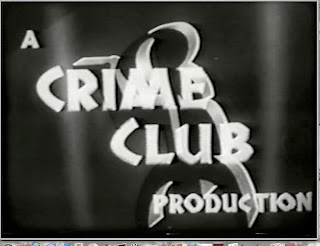 Between 1937 and 1939, Universal released 11 films as part of their “Crime Club Mysteries” series. Among them were three adaptations of Jonathan Latimer’s Bill Crane novels – The Westland Case (1937) from the novel Headed for a Hearse, The Lady in the Morgue (1938), and The Last Warning (1939) from the novel The Dead Don’t Care. All starred Preston Foster as Bill Crane and Frank Jenks as his partner-in-crime (detection, that is) Doc Williams. Made in the wake of the Production Code which temporarily “sanitized” movie screens across the country, the alcoholic haze and stark amorality of Latimer’s world is drastically reduced in these adaptations. Nevertheless, Foster and Jenks are marvelous as the private eyes that would rather investigate dames than crimes, and who prefer to “chase” their drinks rather than criminals.

The three films vary in quality, with The Lady in the Morgue being the best. Below are selected stills from the films, along with a short summary and review. If anyone else has seen these films, please chime in with your opinions in the comments section! 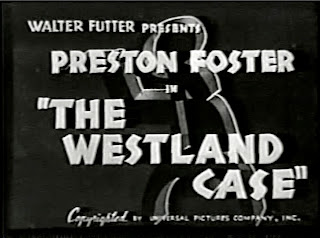 A woman is found murdered in her apartment with all the doors locked from the inside, and only two people had a key: one of them is dead, and the other is her husband. Sitting on death row, he takes a hint from a fellow inmate to hire Crane and Williams to prove his innocence. 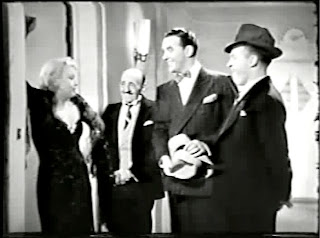 The weakest of the three films, it condenses Latimer’s movie to a brief 62 minutes by cutting out nearly everything but the plot, which flies by so fast that is difficult to follow coherently. This is problematic, as in Latimer’s novel plot is only of secondary importance – it is Bill Crane and his comic hardboiled personality that is the focus. Foster and Jenks still feel awkward in the roles, as though they’re still getting the feel for Latimer’s characters. Cabanne’s direction is economical without being evocative – in general, the whole film feels noticeably “abridged.”

The Lady in the Morgue (1938)
Directed by Otis Garrett, Screenplay adapted by Eric Taylor and Robertson White, Produced by Irving Starr, and Photographed by Stanley Cortez. 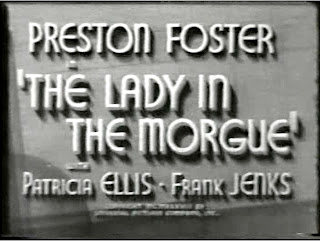 “Maybe swell for you fellows, but what about me! I’m in this thing up to my neck. If I stand still for five minutes Spitzy and Collins start shooting at me. Frankie French is going to kill me on sight. Layman and Storm are on my heels like a couple of bloodhounds, and the District Attorney says I’m practically in the death house right now! Listen brother, client or no client, we dig at nightfall.” –Bill Crane
And just what is Bill Crane digging for this time? The Lady in the Morgue, who was stolen right out from under their noses. One minute she was lying on a slab, and the next minute the coroner was in her place…and just as dead. To add to the mayhem everyone – cops, gangsters, aristocrats and all – think that Crane stole the body. 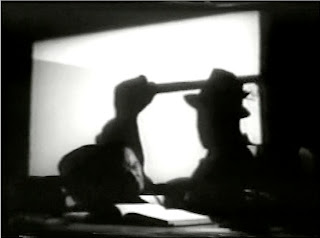 Foster and Jenks are in full swing in their second outing as the detective duo. Even with the alcohol at a minimum, they fully embody the half-interest-in-detection and full-interest-in-pleasure that characterized Latimer’s novel. And Stanley Cortez’s photography is stunning – he later went on to do The Magnificent Ambersons (1942) for Orson Welles and The Night of the Hunter (1955) for Charles Laughton, and his haunting use of light and shadow is on full display even at this early point of his career. 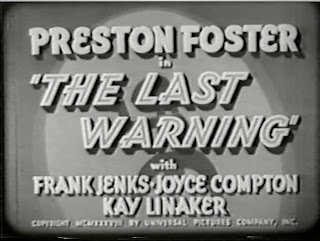 “Look, brother, I’m only a detective. I’m not supposed to know anything.” – Doc Williams

“Ah, but this is the life, though. Butlers, bathing beauties, air conditioned rooms, one continual round of pleasure and social shenanigans.” – Doc Williams 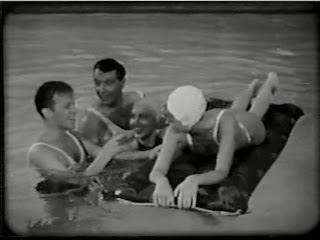 In these two lines, Doc Williams has summed up the Latimer ethos. And in this, their final outing together, Foster and Jenks have epitomized the daze of drink and dames of Latimer’s original novel. In this movie, they’re hired to get to the bottom of a mind-boggling case of blackmail. Notes demanding payment turn up in the screwiest of places – not only in locked rooms next to people’s pillows, but also in their pockets and the palms of their hands! But with all the bathing beauties around, Crane and Williams are too distracted, and before they know it, their employer’s father has been attacked, his sister kidnapped, and the ransom money stolen from plain sight. A comic-mystery delight from start to finish.
at March 09, 2009