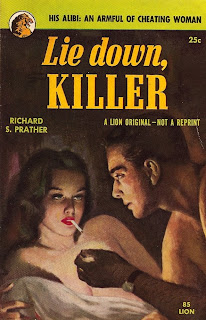 Richard S. Prather is virtually synonymous with his fictional creation Shell Scott. Of his forty-three novels published, only three did not feature Scott. (According to this interview, Pattern for Murder and Dagger of Flesh were originally written as Shell Scott novels, but publishers insisted that Prather change the lead characters’ names; subsequently, they were reprinted with Shell’s name.) The three non-Shell titles were The Peddler (recently reprinted by Hard Case Crime), Dragnet: Case No. 561 (a novelization of the TV show), and Lie Down, Killer.

Originally published as Lion Books (#85) in 1952, Lie Down, Killer will come as a pleasant surprise to Prather fans: whereas the Shell Scott novels are distinguished by their playful plots and hyperactive humor, Lie Down, Killer shows that Prather isn’t always joking around. A thriller of the “wrong man” variety, the story begins as Steve Bennett, a sporting goods shop owner, walks into a diner for an early morning breakfast—little does he realize it may be his last. Two cops pick him up and accuse him of murdering his business partner, and to makes matters worse, the woman he spent last night with refuses to be his alibi. Locked behind bars and with no one to listen to him, Steve realizes his only choice is to escape and prove himself innocent. So when he sees the chance to break loose, he takes it… 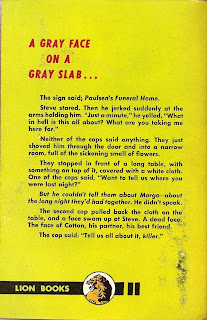 Though it isn’t as instantly recognizable or singular as Prather’s Shell Scott books, Lie Down, Killer is nonetheless a gripping and entertaining read. Not necessarily innovative or groundbreaking in anyway – and certainly predictable (when your childhood sweetheart shows up in a crooked casino and makes all your fantasies come true, expect that she’s going to double-cross you or stab you in the back at some point). And while it may be short on surprises, there’s plenty of Prather’s skilled craftsmanship. The plot moves quickly, the fights are vivid, the “romantic” bits less than subtle, and there are enough clever and eloquent turns of phrases that we remember how capable a writer Prather is. Here are a few of my favorite lines:

“Steve sighed, remembering how quickly Maggie had been transformed from a laughing tomboy into a stranger, to a creature different from him, to a woman who could be loved with all of a gawky kid’s first passion.”

“Even while longing and animal desire grew in him, Steve felt unbidden worry and perplexity darting in his brain. Somewhere, scuttling in the depths of his mind, something dark and ugly was swelling, jabbing at his consciousness.”

“Vague fears, or even solid logic, were poor weapons against the beauty of a desirable woman.”

“From time to time he heard the ugly shriek of sirens, the anguished scream like a kitten in a dog’s mouth.”

Note: I have both the original Lion release, as well as the 1961 reprint by Gold Medal (#s1166). And I’m quite glad to own both copies, as they each feature wonderful cover art. I’m especially fond of the Lion edition because it was actually signed by Prather. The previous owner didn’t care too well for the book – the spine is monstrously slanted, so much that I didn’t dare read the copy. Which is why I purchased the Gold Medal edition, which has a rather unique geometric design. I liked both versions so much that I decided to scan and upload both of them. Enjoy!

Also: Comprehensive bibliographies can be found online at Crime and Mystery Fiction and Thriller Detective. 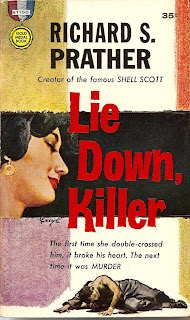 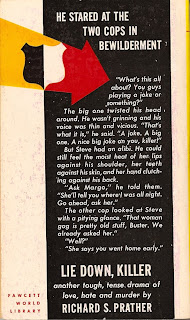 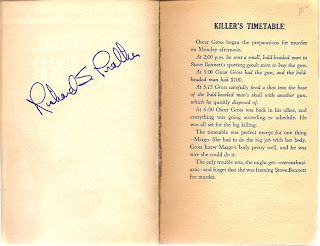