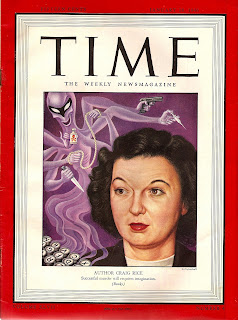 The first mystery writer to grace the cover of Time Magazine wasn’t Dashiell Hammett, Raymond Chandler, Agatha Christie, James Cain, or any of the “big” names one typically associates with the genre. The honor goes to Craig Rice, the androgynous pseudonym for a woman of (literally) many names who throughout the 1940s and 1950s entertained readers with her zazy murder mysteries. The article claims that her full name is “Craig Georgiana Anne Randolph Walker Craig,” but William Ruehlmann maintains that it is “Georgiana Ann Randolph Walker Craig Lipton DeMott Bishop,” however Thrilling Detective suggests that it is merely “Georgiana Ann Randolph Craig.” Regardless of what her legal name may have been, Craig Rice was one of the great mystery novelists, and it’s a shame that she is less well known today. Of her 26 novels (and several collections of short stories, on top of that), only one of her novels is currently in print: Home Sweet Homicide, courtesy of The Rue Morgue Press.

Her style is most often described as a blending of “hardboiled” and “screwball,” in the vein of Hammett’s The Thin Man – but that hardly does her unique sensibility justice. She is most famous for her series about the drunken, curmudgeonly lawyer John J. Malone and his equally soused sidekicks Jake Justus and Helene Brand. Together, their adventures are for more surreal than anything Nick and Nora Charles engaged in. Rice’s trio is also arguably far more cynical – they gladly mix with criminals (though in their world, who isn’t a criminal anymore) and, in general, the world seems to be just two steps shy of the apocalypse. And with little hope for recovery, the three tip back their drinks and ask the bartender to fill them up and keep it coming.

This Time article gives us not only biographical information about Rice, but it also gives a priceless contemporaneous context to her work. It goes into the economics of the early days of paperback publishing (albeit briefly), and compares Rice’s sales to other writers of the time. Most interesting, however, is the genealogy of American crime fiction that the article describes (including the importance of alcohol), and it credits Rice as a pivotal figure in its development. “She invests unholy living and heinous dying… In blending the horrible and the ludicrous, alcohol becomes the catalyst. Drink encourages characters endowed with normal human cowardice to plunge gaily into the ugliest and most dangerous situations and carry them off with unexpected turns of drunken ingenuity.”

For those that haven’t read Craig Rice before, you can still find used copies of her novels at reasonable prices. I recommend starting with the first book in the series, 8 Faces at 3 (which centers around a bizarre death in which all the clocks in the house stopped precisely at 3:00AM). From there, the series only gets better with The Corpse Steps Out, The Wrong Murder, The Right Murder, Trial by Fury (which I reviewed here), and many others. Those looking to learn more about Rice should read Jeffrey Marks' biography Who Was That Lady? Craig Rice: The Queen of Mystery Screwball (Delphi Books).

And what a cool cover of the magazine! I have my copy framed and hanging on my wall. 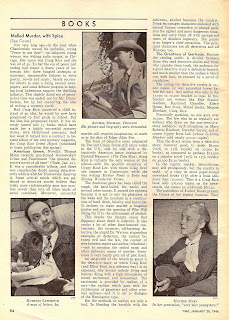 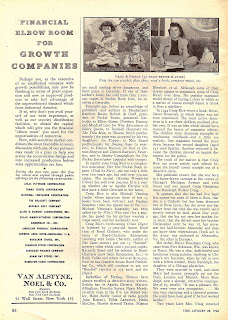 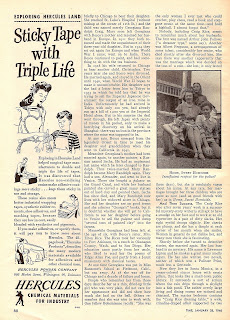 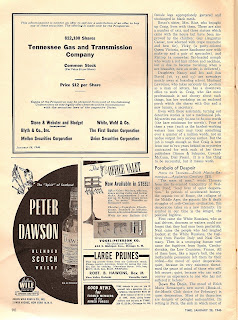