"The Weeping and the Laughter" by Vera Caspary (Popular Library, 1951) 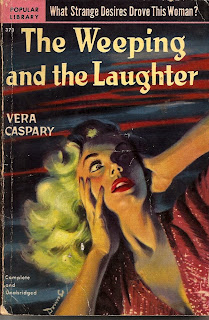 Vera Caspary is best known for writing Laura (1944), which was turned into a film by Otto Preminger starring Gene Tierney and Dana Andrews. Both are certified noir classics. Published seven years later, The Weeping and the Laughter (Popular Library #373, 1951) fails to measure up to the expectations set by Laura.

It’s clear that Caspary is trying to reclaim some of the glory of Laura, as it borrows some of its same themes, characters, and style. They both feature successful businesswomen who are highly independent, and both novels tell the story from multiple viewpoints. But whereas Laura switched between first-person narrators, and used their contradictory perspectives to propel the mystery of the narrative forward, The Weeping and the Laughter uses an omniscient narrator that goes in and out the minds of all the different characters, eventually getting lost amongst in an overly populated story. Between family, neighbors, colleagues, competitors, friends, and enemies, there are just too many characters, none of whom have much distinction at all. Most ambiguous of all, however, is it’s central character. Emmy Arkwright. Throughout Laura we keep asking, “Who killed Laura Hunt?” We are supposed to ask a similar question throughout The Weeping and the Laughter, but instead, I kept asking, “Who is Emmy Arkwright, and why do I care?”

The story begins with a near-car collision between Emmy Arkwright and Nat Volck, she in a Rolls Royce and he in a Chevrolet. She is a wealthy fashion designer and socialite, and he is a doctor who got his training on the front lines of World War II and spent several years offering his services to third-world countries. Even though they are neighbors, they belong to separate worlds, yet when he gets a call one night that Emmy has attempted suicide, they become inexorably linked. 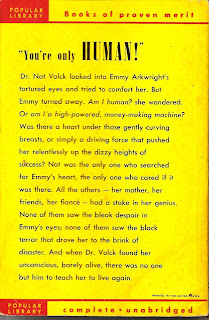 The mystery that runs throughout the novel is, “Did Emmy attempt suicide, or was someone trying to kill her?” Unfortunately, it isn’t enough to sustain its 222 pages. As Caspary introduces an overstuffed cast of characters (including a spiteful sister-in-law, jealous colleague, and two-timing lover), it’s hard to imagine any of them killing her. Rich as they are, they seem quite comfortable with passive-aggressive disdain for one another. At the same time, we never develop enough intimacy with Emmy to really understand or care about why she would try to kill herself. Both she and Nat Volck are like vacuous spaces, and their actions automatic and predictable. As lead characters they fail to draw us in to the narrative. And as a capable a writer as Caspary is, the elements just don’t come together in The Weeping and the Laughter.

The novel is not without its merits. The opening near-accident is engaging, and there are also several humorous moments with the blunt and bitchy sister-in-law. And then there is Caspary’s own writing, of which there are many memorable lines. Here are a few of my favorites.

“Through two windshields their eyes met. The length of the two radiators measured wrath. The cars stood nose to nose like challenging beasts.”

“The homely task distracted Forest. No man could be prostrate while he tried to pry bits of threat out of a zipper’s stubborn metal teeth.”

“Fran laughed at the absurdity. Now that Hitler was dead, she felt free to loathe Herbert’s ex-wife more than any other living person.”

“All unhappy together, this way is better. But Americans, with you unhappiness is like syphilis in the family, a black secret.”

“God help us all, victims of our illusions and early mistakes, victims torn and bleeding in the war between faith and reality in a world that has changed too fast for its inhabitants.”
at February 20, 2009