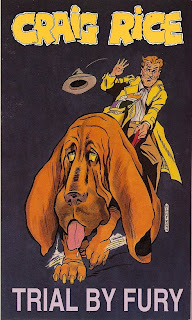 [Note: Trial By Fury was originally published in 1941 by Simon and Schuster. I read the 1991 reprint by International Polygonics, Ltd. Nicky Zann once again designed the wonderfully comic cover.]

Craig Rice creates a world unto its own. She tears through her novels the way her character Helene Brand drunkenly whips around corners in her automobile. If zaniness is intoxicating, then consider Trial By Fury fully soused. Every page is saturated with her inimitable wit and unsettling caricature of rampant murder, political corruption that is equally prevalent in small towns as big cities, and a reckless upper class with no concern for law or order - all of which is served up in a constant, drunken haze. Yet underneath Rice’s comic veneer is a world of steadfast amorality: life is cheap, law is fraudulent, and liquor is the only relief from the meaninglessness of everything. Alcohol was a constant source of escapism not only for Rice’s characters, but herself as well. It is not for nothing that William Ruehlmann wrote of her, “the Dorothy Parker of detective fiction, she wrote the binge but lived the hangover.”

Trial By Fury is the fifth novel in the on-going saga of lawyer John J. Malone, nightclub owner/former bandleader Jake Justus and his wife, the socialite Helene Brand. At the start of the novel, Jake and Helene are off to the sleepy town of Jackson, Wisconsin to do some hunting. Someone else also had guns on their mind: while waiting in line at the county courthouse, someone assassinates ex-Senator Pevely. All the witnesses, however, are too stunned by the first murder in thirty-two years to actually be witnesses. So—Helene and Jake are locked up, and John J. Malone is reluctantly called away from Chicago to get his friends out of trouble. Before that can happen, however, there are several more murders, as well as explosions, gunshots, blackmail, a lynch mob, plenty of “dollar gin,” and a giant bloodhound named Hercules. This gives you an idea why Thrilling Detective dubbed Rice “The Queen of the Surrealistic Crime Story.” 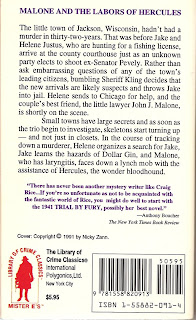 For all her fondness for the screwy and bizarre, Rice’s prose is deftly subtle. Gags and one-liners are nowhere to be found. Instead, there’s a Thurber-esque interest in the anthropology of her characters and their words, gestures, and interactions. The more one reads of Malone and company, the fonder one grows of their idiosyncrasies – Malone’s curmudgeonly attitude, Helene’s drunk driving, and Jake and Helene’s on-and-off again domestic spats. And as for the wealth of minor characters that change from book to book, it is like sitting in a diner in another town, and watching the regulars come and go. So comfortable are they with their surroundings that they don’t realize how open they are to their true personalities and quirks. Rice’s Malone series can be read in any order without losing anything. However, so strong are her characters that it is more fun to read them in order, so that you can follow Rice’s own growing relationship to her characters.

Below are a few of my favorite quotes from Trial By Fury.

“Jake might be in trouble. Helen might have run over somebody. No, that wouldn’t be murder. Although he had a conviction that the way she drove her high-powered cars was a crime worse than murder.”

“Anybody who has the reputation of being the gentlest soul in town must have the seeds of murder in him somewhere.”

“He glanced at his watch and found that it was nearly five o’clock. It was going to be a long, hard and probably unhappy day, he reminded himself, what with small-town politics, murdered Senators, unmarried mothers, and white-haired, elfish little men who didn’t know that prohibition had been repealed.”

“You can’t massacre just one person… One is a murder, two is a sex slaying, three is a massacre.”

“There was one bird, with a particularly nasty voice, that seemed louder than the rest. That one, Malone decided, was the bird that had waked up all the other birds. Nor was it an ambitious bird who wakened early in order to herald the sun. It was probably a disreputable, disorderly bird who had been out all night, and now had staggered home in the first pale light of day to make the morning hideous.”
at February 27, 2009