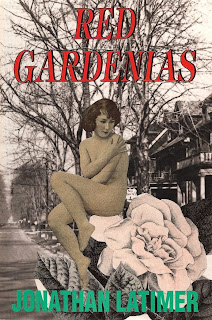 For this week's Friday's Forgotten Books, I wrote about Jonathan Latimer's Red Gardenias, the fifth and final entry in his Bill Crane series. Patti Abbott was kind enough to post my review on her blog, along with other reviews by Paul Brazill, Kaye Barley, Mary Reed, and Patti herself.

Originally published in 1939, the edition I read was the 1991 reprint by International Polygonics, Ltd., who thankfully reprinted all of Jonathan Latimer's books, as well as other great works by Craig Rice and Anthony Boucher, to name just a few. Jennifer Place did interesting collage artwork for most of the Latimer editions, and Nicky Zann did fabulous, satirical cartoons for the Rice novels. Sadly, IPL seems to have gone out of business in the mid-1990s. If you search hard enough, however, you can still find their books. 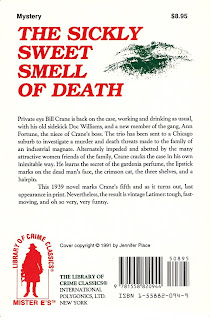 Latimer's cynical blend of screwball and hardboiled is always a pleasure to read. Here are a couple of quotes that are characteristic of his style.

"He remembered with growing indignation the calm manner in which Ann had sent him downstairs. Women were queer. They'd fuss over a man going out in a rainstorm or on a fishing trip, but they'd send him after a burglar as offhandedly as they would for the morning milk."