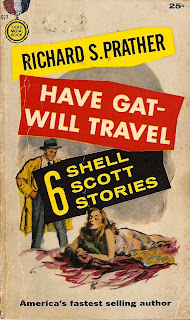 Have Gat – Will Travel (Gold Medal #677, 1957) comprises six of Richard Prather’s Shell Scott stories that originally appeared in various magazines between 1952 and 1956. They are all solid, characteristic examples of Prather’s slapstick-hardboiled hybrid and his inimitable, charming sleaze-ball detective. The architecture of the plots are all straightforward, allowing Shell the most leeway for his explosive personality – and gun, of course.

One of the things that has always interested me about Prather is that not only is he is well aware of Shell’s comic-machismo, but that Shell is aware of it as well. He comments on his garish yellow Cadillac and his busted nose that never healed properly. He even wonders why some of the women are so attracted to him – but, maybe that is just false modesty. Like a cross between Robert Leslie Bellem and Mickey Spillane, Prather careful balances satire and seriousness. Shell Scott isn’t just some “joke” that is out to make fun of private detectives. If that were the case, he wouldn’t have sustained dozens of novels and even more short stories.

What makes Shell so appealing, as well as enduring, is that he’s more than just a super-hero. In these stories alone, he’s on the verge of bankruptcy, shot numerous times, forced to take morphine in order to go into battle, and reminded constantly that his bullheaded zest for women is more than just a minor vulnerability. Heck, even when he makes a movie to help solve a case, he can’t help but admit how terrible an actor he is. Shell has a great sense of humor about himself, and can laugh at the situations he gets himself into. And they can be real doozies, with Prather’s skillful adeptness at both slapstick humor and pulse-racing action.

Shell Scott doesn’t fight crime because of any moral conviction or higher calling, nor because of the money (he seems permanently on the verge of bankruptcy). The girls are appealing, yes, and he does love firing guns. But, perhaps more than anything else, he just seems perfect for the job. Can you imagine Shell Scott doing anything else other than being a private eye? With his quick wit, faster trigger finger, obstinate determination, and irrefutable charm (that sometimes gets him into trouble, but also always gets him out of it), Shell Scott is one of literature’s iconic private detectives. 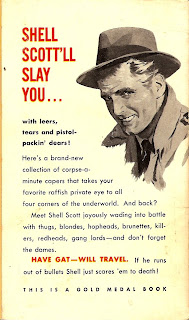 Here’s a rundown of the stories, a short description, a favorite quote from each, as well as the original publication info. Thanks to Thrilling Detective for providing such a thorough and comprehensive bibliography.

“Sinner’s Alley” (Adam, April 1953)
Shell battles a teenage gang.
“The short kid I’d kicked in the groin was vomiting. I hunted till I found the hammer and my gun, then I walked to Shorty and hit him on the head with the hammer. He rolled over. Ratface was moaning softly, so I gave him a tap, too. Then I walked to Chuck, hoping he’d wiggle so I could clobber him. He lay quietly. What the hell! I thought, and I clobbered him anyway.”

“Code 197” (Manhunt, June 1955)
Shell gets tangled in a Communist conspiracy.
“There was a little popping sound and then my gun was jarring the palm of my left hand. I wasn’t conscious of lifting my arm and pulling the trigger, but I saw the guy jerk, heard the meat-ax smack of bullets into his chest. I emptied the revolver into him.”

“The Build-Up” (Suspect, June 1956)
Shell has his poker winnings stolen and is framed for murder.
“Hold it. Most of the cops in town are looking for me. I haven’t time to explain. Ah, sweetheart, uh…I haven’t time for that, either.”

“Murder’s Strip Tease” (Thrilling Detective, February 1953)
Shell’s client is assassinated in his own office while trying to hire him.
“Yeah, guppies. I like guppies and the hell with you.”

“The Sleeper Caper” (Manhunt, March 1953)
Shell heads to Mexico to investigate crooked horse races.
“That’s me. I am the slob with the two tomatoes, and the hell with you.”
Posted by Cullen Gallagher at 3:10 AM