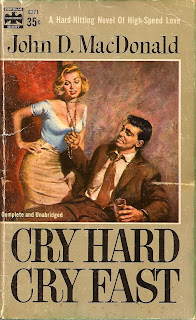 [For this week's Friday's Forgotten Books, I am reviewing John D. MacDonald's Cry Hard Cry Fast. It was originally published as Gold Medal #1739 in 1955. The edition I read was a reprint, Popular Library #6271 from 1958.]

John D. MacDonald wasn't kidding around when he titled a book Cry Hard Cry Fast (Gold Medal, 1955) – it’s a book that continually catches you off guard, and takes you to new and surprising, and often dark, places in every chapter. This book is a prime example of how noir writing is not only restricted to private detectives, dames, murderers, and dark rainy alleys. Cry Hard Cry Fast takes place on an average day in an average city, and its protagonists are ordinary citizens, and their tragedies could – and do – happen everyday. And perhaps that is what makes the book so haunting, and so impossible to put down.

MacDonald structures the novel in an original and innovative way. The opening sentence begins by foreshadowing a car crash. Each of the first six chapters takes the point-of-view of one of the cars involved in the accident and describes their lives leading up to the moment of impact. One man, distraught by the recent death of his wife, takes to the road hoping to get his life back together; another couple has gone on a second honeymoon in attempt to revive their failing marriage; a moody adolescent girl, bored with her provincial life and immature boyfriend, is forced on a family vacation; a pair of bank robbers are fleeing with $42,000 in the trunk and a blonde in the backseat – these are but a few of the characters involved in the crash. And each of their lives is just as desperate as the rest. They take to the road because they are dissatisfied with their lives, and see no escape from the routine of monotony and unhappiness.

Subsequent chapters are similarly self-contained narratives of characters that become involved in the master narrative of the highway accident. There is the tow-truck driver, sickened by the vulture-like nature of his competitors who prowl the highways waiting for death; the doctor who, discontented with his upper-class life, opened the local hospital; and various witnesses to the crash, some that helped and some that fled. MacDonald does an incredible job at packing everyone’s story into a few powerful pages. The characters each come to life in the space of mere sentences, and continue to live on well after their narrative has ended. Like ghosts unable to rest in peace, their despondent vestiges are present throughout.

Published almost a decade before the Travis McGee series began, Cry Hard Cry Fast is brimming with MacDonald’s characteristic perceptions and rich vocabulary. What would be nothing but a cliché in the hands of most writers becomes a fresh experience with MacDonald. His evocative description of sounds and lucid visions of the crash are particularly impressive. Among the most prolific of pulp writers, MacDonald completed no less than three novels and several short stories in 1955, and who knows how many other projects he was also working on simultaneously. Those looking to learn more about John D. MacDonald should head over to Mystery*File to read this insightful interview by Ed Gorman. Thrilling Detective also has an informative bio and an extensive bibliography that will make your jaw drop. 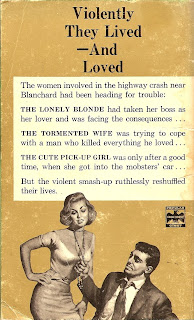 Picking my favorite quotes from Cry Hard Cry Fast was a joy. One could open to a random page and find an example of MacDonald’s stunning prose. Here are but a few examples for your enjoyment. Anyone that has favorite quotes or passages from any of his books and stories is encouraged to add them in the comments section.

“His childhood had been served, as a sentence is served, in that emotional wasteland of a home which should have been broken and was not – a home where hate is a voice beyond a closed door, where contempt is a long intercepted look, where violence is a palpable thing in the silent rooms.”

“He knew he needed sleep. His face felt granular. Every once in a while his eyes would swim and he’d have to shake his head. Twelve hours’ steady driving was about as much as a man could take.”

“Yet all accusations, all conflict was forgotten when his strong hands were here and here, when muscles bunched his back, when the sledge came down from the sky and struck the anvil and, with spark shower, burst it asunder.”

“The crash was like a great slow thick-throated coughing sound containing bright sharp fragments in abrupt frequencies. As the initial sound of the crash passed its greatest peak, yet before it had died away, the second crash built it back to yet a higher intensity. Then, in diminuendo came the lesser impacts, descending to the recognizability of clash of fenders, rip of white metal. The quake of the shock quivered the roadside trees. Meadow birds circled wildly, crying out.”

“The door burst open and she was hurled out. In the final moment before the blackness, she felt acute irritation with the formlessness, the messiness of it. This was destruction and waste, devoid of pattern and meaning. She would be helpless among strangers.”

“The false dawn had paled the east. A truck made a thin insect whine in the distance, coming closer. He stood and listened to it. It went by at last, trailing a long sonorous unending burp. Frazier ran his hands through his hair and shuddered.”

“It had started like a thunderstorm, and now it settled down to a long warm steady rain – tears without thought or reason. Just tears.”
at February 05, 2009