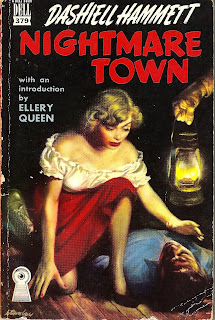 Nightmare Town (Dell #379, 1948) was the seventh collection of Dashiell Hammett’s short stories and novellas to be published by Dell books. It contains four stories, "Nightmare Town" (Argosy All-Story Weekly, December 27, 1924)*, "The Scorched Face" (The Black Mask, May 1925)*, "Albert Pastor at Home" (Esquire, Autumn 1933)*, and "Corkscrew" (The Black Mask, September 1925)*, as well as an introduction by Ellery Queen.

Each of the stories is high quality, full of Hammett’s inimitable character descriptions and clean action prose, though “Nightmare Town” and “Corkscrew” stand out as highlights. All four work very well together, exposing the corruption and crime that lay hidden beneath the seemingly banal surface of Western towns and small cities. “Albert Pastor at Home” is not only the shortest story in the collection (only four pages long), but also the most unusual. It is a conversation between two friends, one of whom recounts a visit back to his rural hometown. Though it features no brawls or gunfights, the ironic twist ending reveals both Hammett’s characteristic interest in the criminal element and also his wicked sense of humor.

What makes this edition extra special is that, in addition to it being a “map back” edition (with a map featuring the locations in “Nightmare Town” on the back cover), there are illustrations throughout. I have scanned each of the illustrations and will upload them in a separate post. 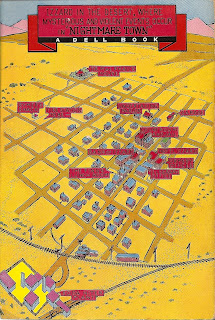 As promised, a few quotes to whet your appetite:

“Strolling thus, a dark doorway suddenly vomited men upon them.”

“Spinning back on its axis, the stick reversed—the ferruled end darted up under warding arm, hit jawbone with a click, and no sooner struck than slid forward, jabbing deep into throat.”

“The ebony stick swung swifter in his hand…Spun to the clicking tune of wood on bone, on metal weapons; to the duller rhythm of wood on flesh.”

“The fence was hidden under twining virgin’s bower, clustered now with white blossoms, and the narrow walk wound through roses, trillium, poppies, tulips, and geraniums that were ghosts in the starlight.”

“The stick whipped backward and forward, from left to right, from right to left. It writhed like a live thing – seemed to fold upon its grasped middle as if spring-hinged with steel. Flashing half-circles merged into a sphere of deadliness.”

“His face was mouse colored under its blood. His eyes were glass agonies. He had the look of am an who had been kicked.”

“A hole was in his blouse, where it fit high under his chin. The hole bled very slowly. The floor around him showed it had been bleeding faster a little while ago.”

“The silk slid away.
Pat hauled me upright.
We started down the stairs.
Swish!
A thing came past my face, stirring my bared hair.
I tilted head and gun together.”

*Special thanks for RARA-AVIS for providing bibliographic information for the original stories.
at January 29, 2009