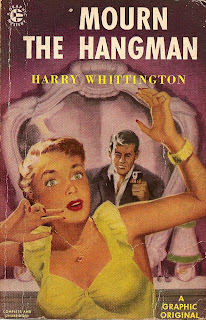 Mourn the Hangman, published by Graphic Books in 1952, is the third Harry Whittington novel that I’ve read (the other two being A Ticket to Hell and You’ll Die Next). While in characteristic Whittington fashion, the novel starts out running with a great first line (“Rain was the evil omen…”), much of the rest of the book lacks that certain je nais se qioi that Whittington, at his best, had so much of. Publishing at the rate he did (writing under several pen names, and ultimately producing upwards of two hundred books), one can’t fault the guy for producing a mediocre book.

Whittington was no stranger to “theme and variation” – in fact, part of what is so fun about reading these books is to watch how different writers work (and re-work) similar situations. As in You’ll Die Next, Mourn the Hangman begins with our protagonist seemingly secure at home…and that’s where the plot begins to thicken. But perhaps what Hangman lacks is enough “variation” on the conventions. The story moves along well enough, but not until the ending does the action and excitement truly pick up.

Steve Blake is a private detective. According to his wife of six months, however, he is a “private snitch” and begs him to quit the business not only for ethical reasons, but also for his own safety. On his way home from his latest case, he drops by the office to inform his partner that he is leaving. Walking through the door to his apartment, he finds his wife waiting for him – dead. Not wanting to waste a moment, Blake forgoes calling the police and heads out looking for the killer. But soon a mysterious phone call informs the police about Blake’s dead wife, and they too start searching for the killer—Blake! To make matters worse, the corporation he was investigating has discovered his true identity and has dispatched goons to hunt him down. And on top of all that, his partner has double-crossed him.

Whittington is quite capable of juggling all of these plot details, and his neatness in structuring the novel means that no detail lacks significance. It might not come until one hundred pages later, but that small detail will become important. Whittington obviously takes writing very seriously. He pays great attention to the prose (there are some really great lines) and to the psychological states of his characters. And while some of the characters in Mourn the Hangman may appear to be pedestrian (like Blake, who is your typical macho-but-sentimental hero), it is the minor characters that become the most interesting. In particular, the token “mystery bar girl” is given a crucial moment of sympathy when Whittington allows her to explain the untimely tragedy that befell her family, and the detail of her record player echoing through the motel corridor until daybreak is haunting to read about. 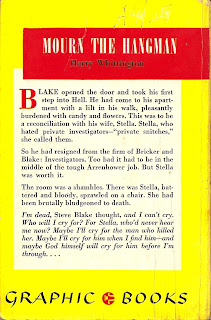 A fast-paced chase scene on the highway ends Mourn the Hangman on an exciting, high note. While I wouldn’t recommend those unfamiliar with Whittington to start with it, for long-time fans it is very much worthwhile, even if it only makes us appreciate the strength of his other novels even more.

Those looking to learn more about Harry Whittington should head over to Pulp Originals and read this article by Jason Starr called “Harry Whittington: King of the Pulp Originals.” Who better to pay tribute to this underappreciated figure than Starr, himself one of the leading writers of contemporary crime fiction!

And, as always, my favorite excerpts from the novel.

“And then Blake pushed through the door to the street. The rain had let up now, but the night was chilled and wet. The music from the Palm Club juke box trailed after him. Love songs. Soft insinuating voices. Things like that, he thought, are for people who are still alive. Not for Blake. He didn’t even have to close his eyes to see Stella before him. There was no reality except the way she looked, sprawled on that divan.”

“As he strode into the bus station, he heard a siren wail in the night. Crying after the hurt and the dead. A lonely, empty sound.”

“He was pretty certain he saw the thick shadow of a man stroll past the sweated window of the restaurant. The cook was frying the steak at a griddle near him though and the aroma of the sizzling meat struck him. He made up his mind to eat this meal if he hung for it. Only, you don’t hang in Florida, he thought grimly, they lead you into a little room and cook you, the way that steak’s frying on that griddle.”

“He knew it was going to hurt, standing there staring into his eyes. What’s worse than looking into your own eyes and knowing you’re alone and despised?”

“Blake decided there was no such thing as freedom, not on this earth, not any more. You meant something to somebody: taxes, labor, gain or knowledge.”

“A gun cracked behind them. It sounded thin and harmless in the rushing wind. But Blake knew. It wasn’t harmless. Terravasi wasn’t the only goon who’d been taught to use a gun by Arrenhower’s money.”

“The tin car was moving again. It had eyes like a deadly beetle in the darkness behind them.”
Posted by Cullen Gallagher at 3:44 PM