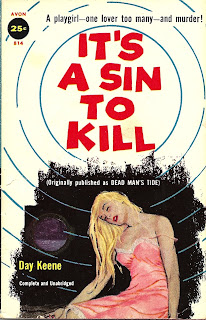 What I like about Day Keene is his swift prose, at once terse and simple yet always evocative. His plotting is barebones and straight forward, the desires of his characters primal and raw, and his words expressive and immediate. A professional writer to the core (with prolific short fiction published throughout the 1940s, and often several novels per year in the 1950s), Day Keene had the remarkable ability to transcend the conventional paths of his novels through a vibrant array of sights, sounds, and colors, and dynamic plotting that never hesitates nor stops to catch its breath. Yet in the midst of constant mystery and action, Keene will suddenly halt and call the reader’s attention to a fine detail of poetry, or perhaps an unusual but redolent metaphor that creates the perfect image. Keene’s sense of pacing is one of fine-tuned yet unpretentious skill—he never waxes poetic just to parade his ability, but always for the sake of the story.

Such is the case with It’s a Sin to Kill. Published as Avon paperback #814 in 1953, it originally appeared earlier that same year under the title Dead Man’s Tide and credited to William Richards (another of the author’s pseudonyms, his read name is Gunard Hjertstedt). It’s story concerns Charlie Ames, the captain of a small boat and former trumpeter who lost his lip as the result of a severe beating. But none of that compares with the situation that Ames has gotten himself into this time: at the start of the novel, he awakens in a strange woman’s bed with lipstick smeared on his face, an empty whisky bottle at his feet, five thousand dollars covered with blood in his pocket, and no memory of the night before. The woman, it turns out, was murdered, and Ames is the only suspect. Soon, however, Ames’ girlfriend is hit with a lead pipe, and when she goes to the police, she finds herself convicted of another murder—the maid of the previously deceased woman, who was found with a knife in her back. It is up to Ames to escape, prove both his and his wife’s innocence, and catch the real killer.

The first page of the novel is a remarkable piece of prose—the body of a dead woman floats in the ocean. But instead of lurid details, Keene describes it in an almost serene manner, remarking on the shifting landscape and rotating cast of fish, porpoises, and turtles that come to investigate the body. While undeniably a funny image, it’s also characteristic of Keene’s attention to detail, and ability to evoke a total sense of atmosphere. 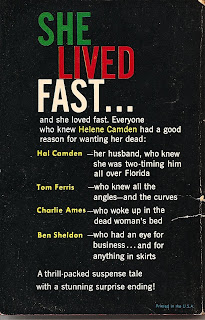 For more information on Day Keene, MYSTERY*FILE has published an exceptional essay by Bill Crider, “The Gold Medal Corner,” as well as an extensive bibliography HERE. And Hard Case Crime has also published the first chapter of Keene’s Home is the Sailor (a highly recommended read) on their website HERE.

As always, here are some of my favorite quotes and passages from the novel. And first up is the opening paragraph:

“The nude body lay like a swimmer in the water, face down, one arm extended. A south moon under, breaking through a rift in the clouds, found fire on one finger of the white, outstretched hand. The small fire glittered and twinkled and flared. Even the full force of the outgoing tide surging through the narrow pass, connecting the bay with the Gulf of Mexico, failed to extinguish it. It seemed to be imbedded in the dead woman’s hand, a last spark of life in the otherwise lifeless clay.”

“A man married to Mary Lou who’d have anything to do with a bag like Helen Camden ought to have his head examined. It would be like getting up from a T-bone steak dinner to gnaw on a stale ham sandwich.”

“The pipe struck the back of her head. Too stunned to scream, still clinging to the suitcase, Mary Lou fell to her knees and the piece of pipe found her head again. She continued to kneel in an attitude of prayer. One star in all the millions of the sky grew brighter than the rest. It grew in size and brilliance until it filled the sky. Then the star exploded in a shower of shooting sparks and all was dark and silence.”

“The kettle drums of fatigue were beginning to play a tympanic solo in Ames’ head.”

“There was something indecent about death. It was so impartially final. The dead lost all rights to personal dignity. They were so much clay, to be handled as such. Being towed through the water as she was, the dead girl’s black skirt and lace-edged white petticoat slipped up to her knees, then her thighs, permitting an exposure she would never have permitted had she been alive.”

“Ames felt as if he’d been swimming through slime and seaweed ever since, and now, at the end of his swim, he was being forced to climb a glass wall.”

“Muted by distance, the siren sounded like a disappointed hound baying after an elusive fox.”

“As he did, the gun he had dropped began to yammer almost hysterically, spraying the night around him with lead.”
Posted by Cullen Gallagher at 3:56 PM