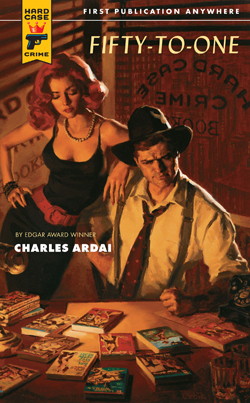 With Fifty-to-One Charles Ardai, the man behind-the-scenes at Hard Case Crime, has proven yet again why he ranks up there among the label’s best writers, alongside Mickey Spillane, Stephen King, Lawrence Block, David Goodis, Ken Bruen, Donald Westlake—the list goes on and on, and Ardai gives them all a run for their money. His second novel, Songs of Innocence (published under the pen name Richard Aleas), one of the most affecting and desolate books I’ve read, is arguably the best book the label has put out. Fifty-to-One, which just hit the shelves, is markedly different than its predecessor. Instead of plumbing the gutter of one man’s soul and all his failings, Ardai has given us a clever and comic mystery/adventure yarn in celebration of Hard Case’s fiftieth release. And a fitting commemoration it is.

Using the title of each of Hard Case’s releases as a chapter title, Ardai chronicles the misadventures of a naïve girl, Tricia, from South Dakota, as she moves to New York City to live with her sister and winds up being chased by the NYPD, the FBI, and a notorious gangster who thinks she stole 3 million dollars from him. With chapter titles like “Lemons Never Lie” and “Shooting Star and Spiderweb” to work around, it’s nothing short of extraordinary how Ardai is able to maneuver through them effortlessly, transcending the structural conceit and making the plot’s progression completely organic. Rising out of the endless cycle of captures and escapes is Tricia’s restrained (or just “strained,” all things considered…) but tender relationship with Charley Borden, the con-artist/book publisher who first swindled all her money away from her, and then commissioned the book that put them both in such hot water. Like two screwball comedians, Tricia and Charley only realize their affection once they stop screaming at each other—and it takes nearly the whole novel for there to be a quiet moment between all the bullets and knives and sirens.

What is remarkable about Ardai’s writing is that he is able to make “hardboiled” seem natural. It’s a feat that was nearly impossible even in the golden days of pulp publishing, but somehow Ardai does it. I don’t know how—but it never fails to impress me. He doesn’t go for easy laughs, or exaggerated stylistics. There’s none of the exclamation points or italics of Spillane (though the influence is there), nor any of the absurd theatrics of Prather or the terseness of Hammett. Finding characteristic excerpts from Fifty-to-One was difficult because Ardai doesn’t write in pull-quotes; instead, there’s an eloquence to his writing that takes paragraphs and pages to fully appreciate. His craft is finely honed, simple and direct, using only the necessary words to evoke the image necessary in a reader’s mind. I’ve picked some of my favorite short passages, which I hope do justice to the humor and skill of the novel. For those wanting more, Hard Case has generously posted the entire first chapter of the novel online here.

“But Tricia had limited confidence in the value of prayers. So she walked, fast as she could, through the night.”

“The jacket hung a little loose on him, Tricia thought, like he’d lost weight recently; funny, the things you think about at a time like this.”

“‘I’ll have you know,’ Tricia said, coldly, ‘things move plenty fast in South Dakota. Boys have more hands there than a wall of clocks.’”

“It was widely known to be a place only men frequented, and mostly a certain type of man: an older man, perhaps, or one burdened with some minor deformity; the halt, the lame; the shy, the scared, the slow of tongue, the foreign accented; those men who appetite for female company, in short, exceeded their ability to procure any for themselves absent a fistful of tickets and a roster of women whose job it was to not notice the defects in their dancing partners.”

“She’d pictured her sister headlining in a rooftop revue, or at least enlivening the chorus, not letting herself be tooled around a dance floor by a succession of sweaty-handed romeos with a buck to spare.”
at December 15, 2008